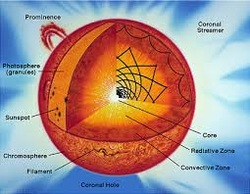 The Core - The center of the Sun is called the "core". The core is the source of the Suns energy and  has an extremely high temperature of more than 15 million degrees Celsius.

The Convective Zone - This zone is the zone that is considered to form the outer layer of the sun. The atoms in this layer of the  sun have electrons because the temperature is cooler compared to the core. In this zone, energy is transmitted much faster than is done in the  radiation zone because it is done in the process of convection. this happens when hot gas emitts from the radiation zone, expanding and rising through the convection zone. This happens because this zone is alot cooler and less dense than the radiation zone. As the gas rises it cools and then sinks and heats back up again when it reaches the radiations zone again causing it to rise up again. This happens over and over again causing convection currents that transmit energy.